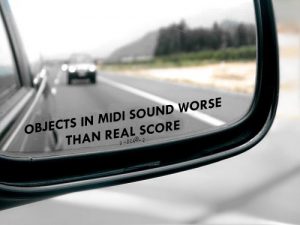 Andrew Staniland is our 2017 TD SoundMakers Composer in Residence! During his time in this role, he will be  posting monthly about his experiences in the classroom and as a composer.

This month Andrew shares his experiences with the MIDI program, and the frequent requests to provide mock ups of new work in the format. While Staniland has come to accept this request…it’s not without reservations.

Over the span of my professional career as a composer, which began around 2002, I have observed a dramatic increase in demand from commissioners for MIDI mock-ups of new pieces in addition to the score. In fact, in 2017, it is unusual not to be asked to provide one upon delivery of the score. I, like many of my colleagues, have come to accept this, but not without reservations. MIDI mockups can sound terrible, especially for contemporary classical music. As a result, it often pains me to send mockup audio, in particular to new collaborators. It also pains me that students don’t have the chance to know the difference between MIDI and the real thing until they receive professional performances, which many do not get during their education.

MIDI, which stands for Musical Instrument Digital Interface, is a rather arcane digital communications protocol that is still used by almost all electronic music gear, from computers to synthesizers. In the contemporary composition trade, it has become synonymous with computer-rendered playback of a digital score. So when a commissioner says “can you please send me MIDI of the piece”, what they are really asking for is a sound recording of a piece as realized by a computer (probably in mp3 format), not the actual MIDI file (which is a real thing: .mid).

Most composers I know, and every single student I have ever taught, uses Sibelius or Finale notation software to create scores. Both programs offer excellent playback capability that gets better every year. In theory, any musical notes inputted can be digitally performed, or played back in the same way a computer can read text aloud once it is typed. Both offer sound libraries that offer realistic acoustic representations of the notes on the score and extensive ‘human playback’ algorithms to achieve musically satisfying results. Sounds pretty good, right? Sure, if you are creating very conservative music. However, contemporary notation goes well beyond the playback capability of MIDI-based software platforms. The software will not represent anything beyond a basic musical note aurally. Any unconventional, unorthodox, or non-traditional methods of singing or playing, are possible to create visually but they generally don’t play back accurately, if at all, leaving critical gaps in any attempted audio representation.

The problem is two-fold. Firstly, students tend to embrace music that plays back well and avoid, or worse, ignore anything in the deaf spot of the notation software. Who can blame them – they want to write music that sounds good when they hit play. This is less of a problem for experienced composers, who know the difference between what it will really sound like and what the computer will play back.

Note the drastic difference between the MIDI rendering of this example and the real recording of Still Turning – for cello and electronics, by Andrew Staniland. with Frances Marie Uitti, cello:
MIDI Only:

The second problem is when premiering a new work, performing musicians may be more likely to rely on the MIDI playback as a primary reference recording for balance and tempo, not just notes and rhythms. This is the same way one might prepare a preexisting piece for performance by first listening to a master interpretation (Horowitz playing Bach, for example). Except computer mockups are missing information from the real interpretations, even if they are meticulously prepared.

In the olden days before 1983, there was no MIDI. Composers wrote scores mechanically, and heard them on real instruments or in the imagination alone (or, perhaps not at all). Conductors studied and prepared these new scores manually, with no assistance other than human musicians. How nostalgic! How exciting! Today we have human playback algorithms and the ability to instantly hear musical realization without skill or imagination right from the speakers of a personal computer. No one would want to go back in time, since the power of notation programs presents clear and obvious advantages to today’s composers. I would say that it is shaping us as composers,teachers and musicians in ways that we did not anticipate or intend.

Let me know what you think. Composers: are you asked to provide mockups? Do you feel they accurately reflect the piece? Performers: do you ask for mockups? How do you use them?

This is the 4th of 6 blogs I will write as composer-in-residence with Soundstream’s Soundmakers program.

Arranging for Art of Time

Q and A with Andrew Staniland