Villains, heroes and other characters are an integral part of opera. They act as our way into the story, connecting us with the worlds they are a part of.

Two Odysseys is no exception to the operatic tradition, and even though the characters have new names and backstories, you can expect them to have similar roles with a few new surprises thrown in. 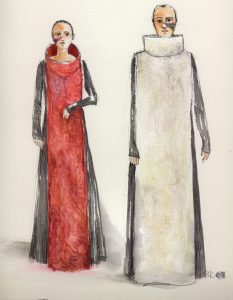 We generally recognise The Trickster as someone who causes a bit of trouble and Weesageechak is no exception, dawning the clothes of others to fool spirits , and get up to other antics.

However, Pimooteewin opens with a Trickster we may not recognise; he’s sad and mournful. Many friends have moved to the world of the dead and cannot return. Well, not without a bit of help at least.

Librettist Tomson Highway describes him as a translator, taking the energies from both the divine and man and passing them back and forth. According to Tomson, the Trickster teaches us “the pivotal lesson that the reason for existence on the planet is not to suffer, not to wallow in guilt but to enjoy life, to take pleasure in the simple act of living.”

“[The Eagle is] more directly a messenger of God, relaying messages between “him/her” and “his/her” people, the fundamental difference between him and the Trickster being that he, the eagle, is uni-dimensionally animal – i.e. all nature,” Tomson explained.

While this high-flying messenger is a creature that many of us connect with dignity and majesty, they are a willing compatriot in the Trickster’s hijinks, following the Trickster to the world of the dead. Misigoo also begins our story morning the loss of her friends and the libretto seems to imply they have lost a life partner.

Our narrator is not only sharing the story in Pimooteewin but is also on a journey herself. According to knowledge keeper Pauline Shirt, who worked with our team in development and rehearsals, some spirits passing into the Spirit World can become stuck in an in-between space. The co-directors of Pimooteewin chose to have the narrator searching for a way back to the land of the living from this space.

Áile is described as small, tender and caring by the Tribe; she’s their “morning star” and a beacon of hope for the future. She’s already been tasked with becoming a leader; teaching them new ways, and carrying on the old ones.

She’s unafraid of an adventure and a bit of a romantic, running into the unknown with her love early in their courtship.

While she spends a lot of time away, she’s extremely close with her tribe, returning to them regularly and ensuring her sons are able to meet her people and learn their ways. 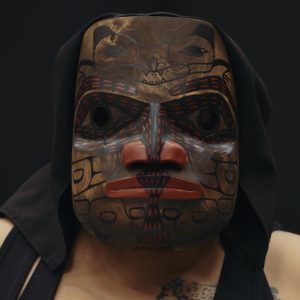 The Bear is our mythical hero, and a creature extremely sacred to the Sámi people. His name does not mean Bear directly, but is a reference to his mystical nature.

The Bear travelled alone across the countryside before meeting Áile, content to do so until they met. Now that the pair are together their love is fierce and they are near inseparable (Spoiler alert: there’s a terrific duet to showcase this).

They are exactly who they sound like, three perfect boys; praised as having “the stamina of their father” and their mother’s “soft movements”. The Tribe is eager to have these three join them. They also act as teachers to the tribe, much in the way their mother has.