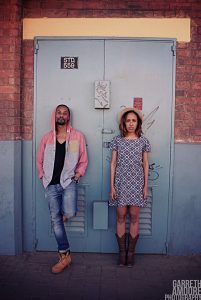 Help Soundstreams fly two of South Africa’s top talents to Toronto for Music of the Rainbow Nation at Koerner Hall on November 23rd!

When the Nelson Mandela University Choir cancelled their North American tour (due to the closure of their university NMMU, one of many affected by nation-wide protests and strikes), Soundstreams created a dynamic new program. Remaining close to the original intention of the concert, the line-up is inspired by the “Rainbow Nation,” Desmond Tutu’s moniker for post-apartheid South Africa, and Mandela’s dream.

We are facing unexpected demands on our resources while creating this new and expanded production, as we are now bringing a variety of performers from Canada, the U.S. and South Africa to the stage. It is no small feat to bring professional talents from halfway around the world!

Kim Sanssoucie and Batsile Ramasodi are the faces of today’s South Africa – premiering works both at home and internationally, they take viewers into the private lives of people living in the post-apartheid country.

For Music of the Rainbow Nation, the pair will dramatize the journals and diaries of Nelson Mandela – giving Toronto audiences insights into what Mandela’s dream means for South Africans today.

We are asking for your help to make this all possible. We need to raise $2,500 to cover airfare.
Every donation brings us closer to this goal.