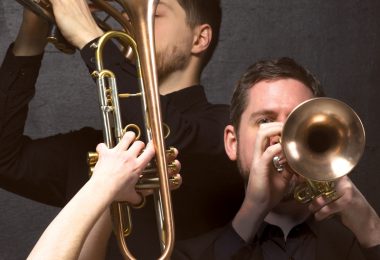 Three virtuoso trumpeters together for the first time, complete with full string orchestra, performing works ranging in style from baroque to jazz, to world premieres. Immerse yourself as the entire concert hall becomes our stage with spatial and theatrical elements.

What has always attracted me to the sound of the trumpet is its ability to signal significant changes in society. Much as we love the sound of a joyous fanfare opening a parliament, or a performance at the Stratford Festival, the trumpet has also been a harbinger of war, and remembrance as in the “last post”. In this program, trumpets mark dazzling opening celebrations as in Telemann, battles among the Greek gods as in Heather Schmidt’s Titanomachy, and a wake-up call for climate change in Anna Pidgorna’s Three Woes. Who else but Soundstreams could do all that in one evening?

Pre-show chats run before the performance at 7:00 p.m., with composers and performers from the production, hosted by Soundstreams’ artistic director Lawrence Cherney.

Serenade for Three Trumpets is commissioned with the generous support of Michael and Sonja Koerner.