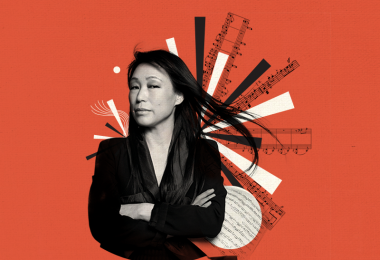 The Music of Unsuk Chin Sun, May 28, 2017 at 3:00 PM Koerner Hall, TELUS Centre 273 Bloor Street West
Sounds from the dream world—virtuosic, ironic, mischievous, and dramatic.
“Unsuk Chin is sought after by leading orchestras and soloists for her colorful, audacious, and darkly humorous music.” —The New York Times

This concert features one of contemporary music’s most sought-after creators, Unsuk Chin, who seeks to render in sound the “visions of immense light” she sees in her dreams.

Winner of the 2004 Grawemeyer Award, and mentor for Soundstreams’ 2017 Emerging Composer Workshop, she defies conventional cultural genres, drawing her inspiration from wordplay and experimental poetry.

This instrumental and vocal concert includes Chin’s Cantatrix Sopranica—a playful exploration of the act of singing for two sopranos, countertenor, and ensemble—as well as works by Canada’s Chris Paul Harman, who shares Chin’s affinity for transforming familiar source materials with musical language that is fresh, vivid and thrillingly modern.

Stay after the concert for a post-show chat with Artistic Director Lawrence Cherney and artists from the concert.

* – Co-commissioned by Stanley H. Witkin and The Royal Conservatory of Music/Koerner Hall