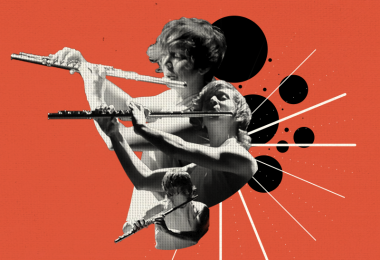 Magic Flutes Wed, October 12, 2016 at 8:00 PM Koerner Hall, TELUS Centre 273 Bloor Street West, Toronto, ON
The sound is all around, in this virtuoso flute concert featuring iconic repertoire and a world premiere.
“Claire Chase is a staggering virtuoso who plays with the cocky assurance of a rock star.” —Los Angeles Times

Magic Flutes is also available as part of a Soundstreams full or Pick 3 subscription! Call 416-504-1282 or visit our Subscriptions page for more info.

The Pied Piper legend is just one inspiration for this playful “surround-sound” flute concert, in which the music springs from unexpected directions.

Descended from the oldest of all known instruments, the flute has long been credited with magical powers. Its surprising range of voices include ethereal to edgy, connecting the human, animal, and spirit worlds.

Arrive early for a free pre-concert chat with Artistic Director Lawrence Cherney, and artists from the concert.