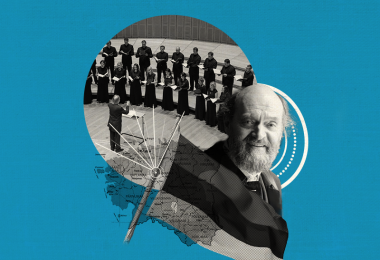 Estonian Philharmonic Chamber Choir Thurs, February 2, 2017 at 8:00 PM St. Paul's Basilica 83 Power Street
A celebration of Estonia’s nationhood features favourites by Arvo Pärt – and a world premiere.
“Few choruses have such an intimate connection with their conductor and with the music they perform.” —The Washington Post

Cherished as a national treasure in its own country, the Estonian Philharmonic Chamber Choir — famed for showcasing the work of such renowned compatriots as Arvo Pärt—has also been greeted in North America with the rapture accorded to rock stars.

As the 100th year of Estonia’s independence draws near, conductor Kaspars Putniņš (who last joined Soundstreams for the Canadian Choral Celebration) leads this choral concert featuring works by Pärt and selections from Rachmaninov’s Vespers.

Arrive early for a pre-concert chat with Artistic Director Lawrence Cherney and artists from the concert.

Check out the videos below to sample the sounds of the Estonian Philharmonic Chamber Choir, and the last work by Riho Maimets premiered by Soundstreams: