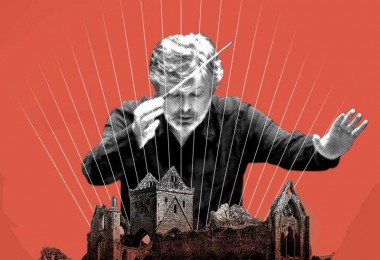 The Music of James MacMillan Tues, March 8, 2016 at 8:00 pm Trinity-St. Paul's Centre 427 Bloor Street West, Toronto ON
Scotland’s most celebrated composer conducts this concert featuring his mesmerizing choral evocation of Christ’s crucifixion.
“A composer so confident of his own musical language that he makes it instantly communicative to his listeners.” —The Guardian

In this choral concert, MacMillan himself conducts Choir 21 and the Virtuoso String Orchestra in a program at Trinity-St. Paul’s Centre comprising Canadian works, selected motets by J.S. Bach, and his own 1993 cantata Seven Last Words from the Cross. Combining dramatic narrative with spiritual meditation, this spellbinding sequence of seven adagio movements, inspired by the four gospel accounts of the Crucifixion, is justly regarded as one of his masterpieces.

Watch a greeting from James MacMillan below!

Travel for James MacMillan is generously supported by the Scottish Government and the British Council.

Watch the videos below to get a sense of Seven Last Words from the Cross, and to hear MacMillan speaking about his work.