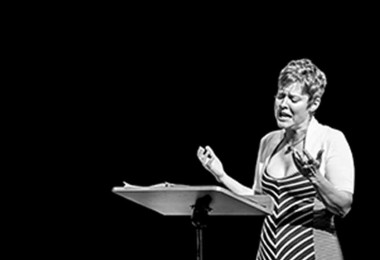 $18 in advance online, $15 at the door for ages 30 and under or for those with a ticket to The Whisper Opera. General admission.

ICE will follow their second performance of The Whisper Opera on Saturday February 28 with an intimate concert of chamber music at The Theatre Centre exploring the expressive breadth of contemporary music, from the 1960s to the present day.

This program is framed by the heavy bass drums left hanging on ropes from ICE’s performance of David Lang’s the whisper opera. These boomy drums are used in unusual ways by Canadian composer Sabrina Schroeder and French innovator Gérard Grisey. In Thirteen Changes, Pauline Oliveros, a close collaborator of ICE who has been at the forefront of experimental music for six decades, uses a poetic text in place of a traditional score. Iannis Xenakis’ powerfully grinding Charisma contrasts with Maria Stankova’s sweet lullaby, Rapana. The program closes with a high-energy homage to Shakespeare’s The Tempest by downtown New York legend John Zorn.

The International Contemporary Ensemble (ICE), described by the New York Times as “one of the most accomplished and adventurous groups in new music,” is dedicated to reshaping the way music is created and experienced. With a modular makeup of 35 leading instrumentalists, performing in forces ranging from solos to large ensembles, ICE functions as performer, presenter, and educator, advancing the music of our time by developing innovative new works and new strategies for audience engagement. ICE redefines concert music as it brings together new work and new listeners in the 21st century.