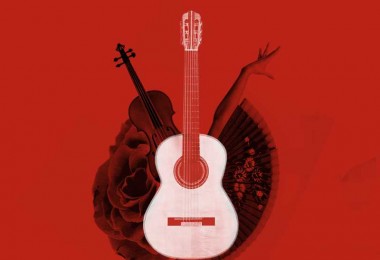 Reimagining Flamenco November 13, 2013 at 8:00 pm Trinity St. Paul's Centre
The age-old music of fire and passion—as you may never have heard it before.
“Grisha’s technical wizardry and absolute command of the Flamenco genre have blown away audiences around the world.” —boston.com

A familiar art-form reveals fresh and unexpected facets as Russian guitar virtuoso Grisha Goryachev, pianist Serouj Kradjian (whose playing was described by The New York Times as “a persuasive balance between elegance and spirit), and flamenco singer Antonia Contreras bring contemporary perspectives to the traditional music of Andalusia. Besides a rare opportunity to hear the original chamber version (with flamenco singer) of Manuel de Falla’s El amor brujo—with its celebrated Ritual Fire Dance, in which a young widow is freed of the ghost of her unfaithful husband—the concert featured classically flavoured reinventions of guitar and piano pieces by the old flamenco masters.

The world premiere of a new work by Canada’s André Ristic rounded out this exploration of a distinctive and much-loved genre.