SoundWeavers, our final Salon of the 2015/16 Season was held on Friday June 17th at the Gardiner Museum. The evening featured two exciting new premieres, both of which were composed in collaboration with and performed by Jumblies Theatre‘s mixed-age-and-ability choir Ground Floor, as well as a quartet of guest professional singers (Sarah Albu, Hussein Janmohamed, Alex Samaras, and Maryem Tollar).

Before the program began, Soundstreams Executive Director Ben Dietschi had a chance to chat with Jumblies founder and Artistic Director Ruth Howard about what Jumblies does:

Jumblies makes art in everyday and extraordinary places with, for and about the people and stories found there. Jumblies undertakes multi-year urban residencies; creates new works of participatory art and collaborates with and mentors other artists and organizations to proliferate exciting art-making that engages with and creates inclusive community.

The first work on the program was Cathy Nostay’s Here, Here, Here!, a mini-song cycle inspired by poems written by Sasha Tate-Howarth and community members of the CityPlace neighbourhood. The work incorporated various sound effects to paint the colourful imagery in the texts – including sounds mimicking the rushing of wind and waves in water.

Art featuring the texts of the piece were displayed on a table at the front of the room as well as projected during the performance. 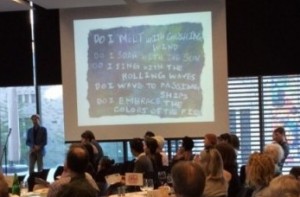 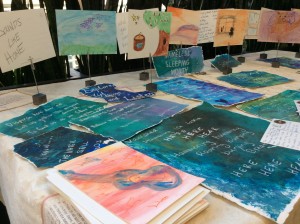 Next on the program, was a new work by our TD SoundMakers Composer in Residence Emilie Lebel. Ben had a chance to speak with Emilie about her new work, titled Take This Card, before its premiere. She explained that the piece was inspired by postcards passed between community members in Toronto and herself over the past eight months. These postcards were a way to keep in touch after Emilie moved to Montana. 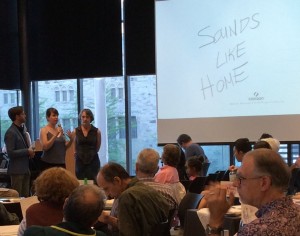 Some of the postcards were displayed at the front of the room (along with the art created for Here, Here, Here!) as well as on the tables of audience members.

Audience members were also invited to create their own postcards at a table at the side of the stage. 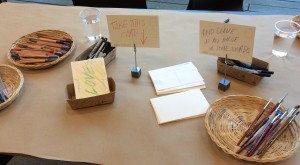 One postcard created by a community member that was sent to Emilie read:

Take this card to the bottom of a lake
Across mountains, through the clouds
Then send it back.

The piece began with this text, sung by four soloists who emerged from different corners of the room. The soloists gradually moved around the space, immersing the audience completely in their sound. The choir joined in the texture with beautiful melodies and radiant hums – taking the audience with them through their journey to “the bottom of a lake, across mountains” and “through the clouds”. Then, just as the piece began, the choir faded and the soloists proceeded offstage to their original positions – almost as if mimicking the journey of the postcard sent back to its author once again.

Afterwards members of the Ground Floor Choir discussed their experience collaborating on these new works and what being part of this group meant to them. One singer summed up the discussion perfectly with the following statement: “Choir is community.” 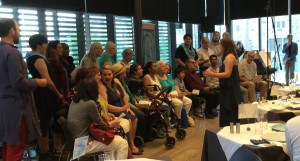 What a truly moving experience it was to see Jumblies Theatre’s Ground Floor Choir premiere these two works – to truly see and experience the beauty and impact of music in community.