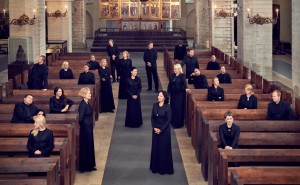 “We hope audiences will find these interactions meaningful, and above all, fun!” said Soundstreams Artistic Director Lawrence Cherney in a press release statement.

Soundstreams will also team up for a second time with the RCM’s 21C Music Festival for a concert with Berlin-based composer Unsuk Chin and Canada’s Chris Paul Harman.

Following the choral theme, The Estonian Philharmonic Chamber Choir will return to Toronto on February 2, 2017 with a programme including two premieres by Canadian/Estonian composers Riho Esko Maimets and Omar Daniel.

“We are looking forward to our first collaboration with the Nelson Mandela University Choir, whose exuberant performances of African and Western repertoire have never been seen in Canada before,” Lawrence Cherney said.

On Oct. 12 Soundstreams returns to Koerner Hall with a “surround-sound” concert called Magic Flutes. The ensemble, including flute stewards Leslie Newman and Robert Aitken, will perform works by Glass, Takemitsu, Debussy, Somers, and a new piece by Toronto’s Anna Höstman.