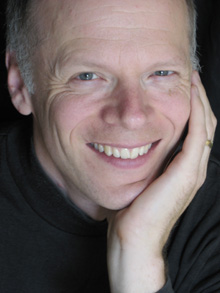 Toronto composer James Rolfe (b. Ottawa, 1961) has been commissioned and performed by ensembles, orchestras, choirs, and opera companies in Canada, the USA, Europe, and New Zealand. His work has been recognized with a Guggenheim Fellowship (2000), the K. M. Hunter Music Award (2003), the Louis Applebaum Composers Award (2005), the Jules Léger Prize for New Chamber Music (2006), and SOCAN’s Jan V. Matejcek Concert Music Award (2009), and the 2014 Outstanding Choral Work Award from the Association of Canadian Choral Communities.

In The Music of James MacMillan on March 8, Sir James MacMillan will conduct Rolfe’s work When Lilacs Last in the Dooryard Bloom’d, a choral piece that was commissioned by Soundstreams for a University Voices event in 2006.

We chatted with Rolfe about how he first met Sir James MacMillan, how he wrote his piece based on poetry by Walt Whitman, and who are his favourite fellow artists named James.

Soundstreams: How did you decide to become a composer?
James Rolfe: I got bored counting rests as a trumpet player.

SS: How did you first meet Sir James MacMillan?
JR: He and I shared a Soundstreams concert back in 2001.

SS: Your piece that will be performed on the program, When Lilacs Last in the Dooryard Bloom’d, has portions of text from a Walt Whitman poem. How did you decide which words to include?
JR: I chose passages for their momentum, rhythm, and increasing intensity as the piece builds towards the climactic section, the hymn Come Lovely and Soothing Death.

SS: This poem was an elegy written by Whitman during a period of mourning for slain American President Abraham Lincoln. In it, Whitman does not refer to the President by name, but uses different symbols, like the lilacs. Why was this work important to you? What are your thoughts when you compare it to modern poetry?
JR: I appreciate Whitman’s acceptance of death as part of life, an attitude he earned the hard way as a medic on the front lines of the Civil War. I enjoy modern poetry too, but it’s rare to find modern lyrics which are suitable for choral singing. Whitman’s verse has an expansiveness, rhythm, gregariousness, and knack for expressing group sentiments which make it natural for choirs.

SS: What makes you choose to write for voice, as opposed to small ensemble or orchestra?
JR: Each medium has its beauties, but none can communicate feelings and emotions so directly and intimately as the voice.

SS: What are some of your hobbies when you’re not composing?
JR: Running, baking, traveling, canoeing, hiking, gardening, reading, theatre, dance…

SS: Who’s your favourite creative individual named James (other than yourself and MacMillan)?
JR: James Brown! Followed by James Baldwin and Etta James.

Join us for The Music of James MacMillan on March 8, at Trinity-St. Paul’s Centre, and hear Rolfe’s work and more. Tickets on sale now!