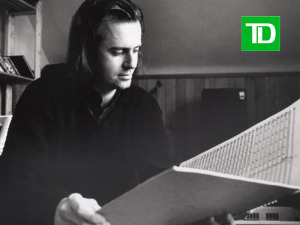 Our TD Composer of the Month for January is Canadian Chris Paul Harman.

Since 2005, Mr. Harman has served as Assistant Professor of Composition at the Schulich School of Music of McGill University in Montreal.

The Toronto Fanfare Project, a series of eclectic concerts presented as part of the 2006 soundaXis festival of music and architecture, offered an elaborate five-day welcome to this rich literature for brass ensemble, animating some of the great architectural and acoustical masterpieces in the core of Toronto with a celebration of the music of Canada and its northern neighbours.

Harman composed Projection at a time when he was pursuing his growing interest in condensed forms of expression. Consisting of many small sections and many even smaller fragments, the piece has a decidedly anti-narrative large-scale structure. Yet despite its lack of an overarching narrative, it still creates dramatic expectations—even though these are systematically undermined.

Commissioned with generous support from the Laidlaw Foundation