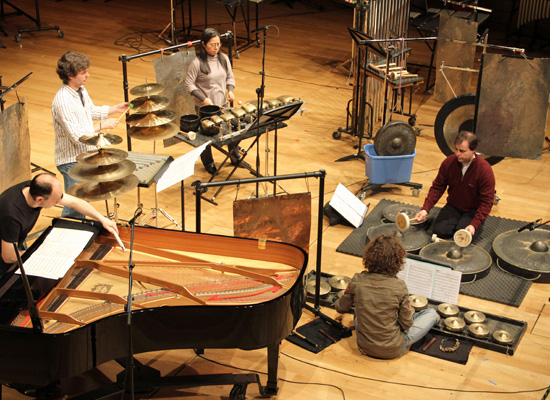 Composer George Crumb (b. 1929) is well known for exploring unusual timbres in his compositions, as well as calling for instruments to be played in unique ways. He was initially influenced by Anton Webern, an Austrian composer and conductor known for his radical innovations in musical technique.

In our season opening concert, we will explore selections from Crumb’s American Songbook, which compromise new arrangements of American hymns, spirituals, and popular tunes, like When the Saints Go Marching In. The songs typically retain the familiar tunes that most will know, but the accompaniements are written for amplified piano and the percussionists use a wide range of musical techniques.

We decided to explore some of the interesting and exotic instruments that the percussionists will play during Adrianne Pieczonka: Beyond the Aria, as well as the unusual ways they will be playing the instruments themselves.

The Bao gong (often called a Temple Gong) is considered to be a sacred gong as it has been used in temples throughout China, Japan and many other Asian countries for centuries. What makes the Bao gong distinct is the central raised boss that is often made of a different metal to the rest of the gong.

Boa gongs have two distinct sounds depending on whether they are struck on the boss (the raised portion of the gong) or next to it. They have a clear, resonant tone but do not produce the rich overtones and shimmer that is available in gongs like a wind gong. The metal of a Bao is thicker than that of a wind gong and, like a chao gong, they have a lip around the edge of the gong. Bao gongs are tuned to various pitches and come in a wide variety of sizes ranging from very small to massive.

This instrument, in various sizes, will be played during Weep, All Ye Little Rains and Dry Bones. It will be hit in the traditional manner, but also bowed with a bass bow, and scraped with a piece of metal, to produce various sounds. The bao gong, chao gong and wind gong will all be played at some point during American Songbook.

In Crumb’s score, he calls this instrument ankle bells, but it is traditionally known as a Ghungroo in Hindi. It is a musical anklet that is traditionally tied to the feet of classical Indian dancers. The sounds it produces vary in pitch depending on the size of the bells, but is similar to sleigh bells, although more subtle.

They are usually worn above the ankle on a dancer (right), but in this concert, the bells will be shaken by the percussionists. This instrument will be played during Weep, All Ye Little Rains and Down in the Valley. 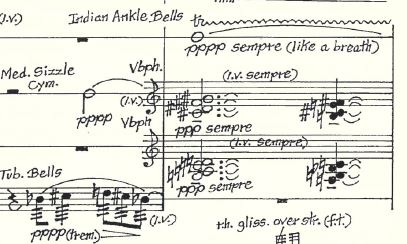 Various kinds of wind chimes are called for in American Songbook, one of which is bamboo. The bamboo version will be played by all four percussionists during Dry Bones. They will be struck with various levels of force to change the duration of sound and the volume.

Most people likely know what wind chimes sound like, but in case you don’t, here’s 42 minutes of bamboo wind chimes. Perhaps you can listen to help put you to sleep?

The angklung is a musical instrument made of two to four bamboo tubes attached to a bamboo frame. The tubes are carved to have a resonant pitch when struck and are tuned to octaves. The base of the frame is held in one hand, whilst the other hand strikes the instrument, which causes a repeating note to sound. Playing angklung as an orchestra requires cooperation and coordination, and is believed to promote the values of teamwork, mutual respect, and social harmony, which you can see below.

The angklung is popular throughout Southeast Asia, but it originated in what is now West Java and Banten provinces in Indonesia, and has been played by the Sundanese for many centuries. This instrument will be played by two percussionists during Dry Bones.

The cabasa is likely known by some based on its appearance only. It is constructed with loops of steel ball chain wrapped around a wide cylinder. The cylinder is fixed to a long, narrow wooden or plastic handle.

The cabasa made of a gourd was originally of African origin, and constructed from dried oval- or pear-shaped gourds with beads strung on the outer surface. The metal cabasa was created by Martin Cohen, founder of Latin Percussion, which built a more durable cabasa that they call an afuche-cabasa. It provides a metallic, rattling sound when shaken or twisted, similar to the sound of a rattlesnake. The instrument is frequently used in music therapy, particularly with individuals who have physical/neurological disabilities as it requires minimal hand movement to produce a sound. It is often heard in dance tracks, such as the one below, and will be played during Dry Bones.

A sizzle cymbal is a cymbal to which rivets, chains or other rattles have been added to modify the sound, attached either by means of holes bored in the cymbal or by means of an attachment known as a sizzler. It’s commonly seen in standard drum kits, but can be used on its own, as it will in this concert.

This instrument, in various sizes, will be played during Dry Bones and When the Saints Go Marching In. It will be hit (as in the video above), but also bowed and scraped to produce various sounds.

In his score, Crumb refers to this instrument as finger cymbals, but it is more commonly known as Tibetan cymbals. The video below demonstrates the sound of the finger cymbals, which are usually struck together to produce a sound.

During the concert, instead of hitting these cymbals together, the percussionists will spin them as they ring, to help the sound resonate, creating a subtle whirling effect.  They will be played during Weep, All Ye Little Rains and Down in the Valley.

Join us on September 29 for Adrianne Pieczonka: Beyond the Aria, to hear Crumb's American Songbook. Tickets on sale now!