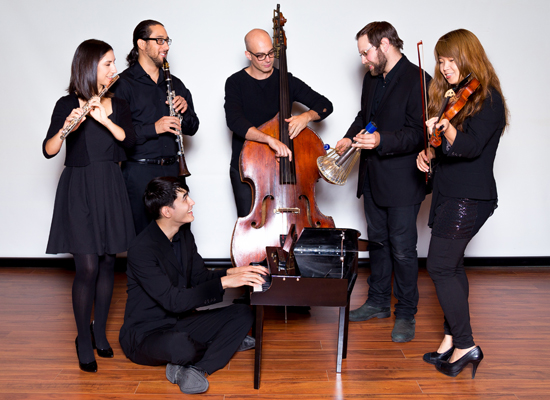 This is the last of a three-part series highlighting some of the most exciting big music coming from small places, featuring some of Toronto’s foremost “indie” new music presenters. Check out part one, and part two.

In the digitally-fueled D.I.Y. generation, artist collectives have become fully-functional micro presenters, producing incredible audience experiences keeping more established organizations in the city on their toes! In the audience, you’ll feel a special energy from these groups. Because the artists themselves are in control of the entire presentation process, they present their craft passionately and directly to you, up close and personal, just as they intend it.

Tell us what you think and give anyone that we missed a shout-out in the comments section. Be sure to read part three next week to find out who got the most mentions as an “Indie Presenter Crush!”

Soundstreams: When and why did you form your collective?
Mitch Renaud: We formed in 2012 and presented our first concert in the fall of 2013. We all met in Toronto while at university and were interested in one another's creative work.  Forming a collective feels like a micro-community of mutual support, giving us the impetus, energy and inspiration to collaborate on joint projects, while forming relationships with other artists and places along the way. We named ourselves Blue Moss because we liked that moss often exists in quiet places such as on forest floors, hanging from trees, or in between things, and that its rate of growth is slow. It seems that a lot of things happen very quickly, especially in an urban environment, but in our artistic work, we tend to privilege slowness over urgency.

SS: Ideally, where will Blue Moss Ensemble be in five years?
MR: We're kind of amazed by the musicians, composers and ensembles we've already had the opportunity to meet and work with. Every concert has been incredibly rich and filled with gifts. We'll be happy if we can continue to do this well into the future! 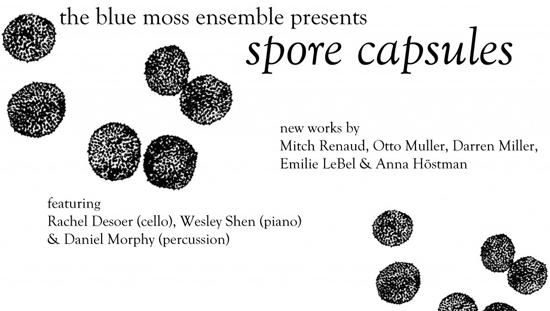 SS: As an audience member, why should I attend performances by smaller companies? What can I expect at one of your shows?
MR: Smaller collectives seem to have a lot of flexibility and fluidity. They might be less situated, but this often gives them porous membranes, and a sense of developing within a larger ecosystem. This sensitivity to surroundings means collectives are endlessly re-creating themselves within a complexity of relationships. We're very appreciative of audiences who are attracted and open to this kind of experience, who are curious about concerts put on by small companies. Our shows are made up mostly of premieres. We like seeking out a variety of venues: traditional concert spaces, artist-run galleries, private homes, tiny patches of light, etc.

SS: What’s the most exciting thing coming up for your ensemble in the next year?
MR: We're thrilled to be collaborating with Montréal's Quatuor Bozzini and Toronto's John Oswald in a concert at the Music Gallery this fall.

SS: Who is your indie presenter crush?
MR: Many of the collectives in Toronto are amazing and brave and doing remarkable things and we are so happy to be a part of this momentous groundswell! To choose only one is very difficult, but we would certainly love to say bravo to Thin Edge Collective for how much energy and enthusiasm they infuse into everything that they do! They are not only fantastic performers, and creative and eclectic programmers, but they are also so warm, affable and supportive that we can't help but feel blessed they are here in Toronto.

Last but NOT least, with the most votes as Toronto’s Indie New Music Presenter Crush:

Soundstreams: When and why did you form your collective?
Monica Pearce: Chris Thornborrow and I started the Toy Piano Composers in 2008 right after we had finished our Masters at the University of Toronto. We wanted to present a series of all new music written by emerging composers, for all different ensembles, and with all sorts of different concepts. We thought we could play with the style of presentation so that it could be very inviting, imaginative, and open–with the toy piano as a symbol of that approach. It has been a wild ride since!

SS: Ideally, where will Toy Piano Composers be in five years?
MP: We have been amassing a pretty incredible amount of new works from many different forces over the last seven years–in five years, I think we will have even more amazing stuff and hopefully we will have the capacity to present that music to even more new audiences. We would love to do a cross-Canada tour, with a TPC recording in tow. Or maybe we will present a full mainstage opera by that point. Or maybe we'll do a hovercraft concert–it will be 2020 by that point, so who knows what could happen! 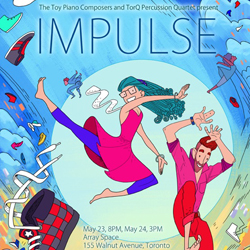 SS: As an audience member, why should I attend performances by smaller companies? What can I expect at one of your shows?
MP: I personally love the intimacy of concerts by smaller companies. Usually you have the opportunity to be closer to the action, and in some cases get the chance to mingle with the performers, composers, and other creators. At one of our shows, you can expect to hear a diverse program of music, to learn about the context around the works, and meet some interesting people. We try and curate an experience that is welcoming for all types of curious listeners, including those who are new to concert music.

SS: Who is your indie presenter crush?
MP: I think we've all got a soft spot for Thin Edge New Music Collective. I was there for their first show in 2010, and for most of them since. They have presented some extremely interesting stuff, and they've taken some really impressive risks along the way. But we also have a great big love crush on Bicycle Opera Project!

The first five people to email Ben Dietschi at [email protected] with your “Indie Presenter Crush,” will receive two tickets to either:

This is the last of a three-part series highlighting some of the most exciting big music coming from small places, featuring some of Toronto’s foremost “indie” new music presenters. Check out part one, and part two.