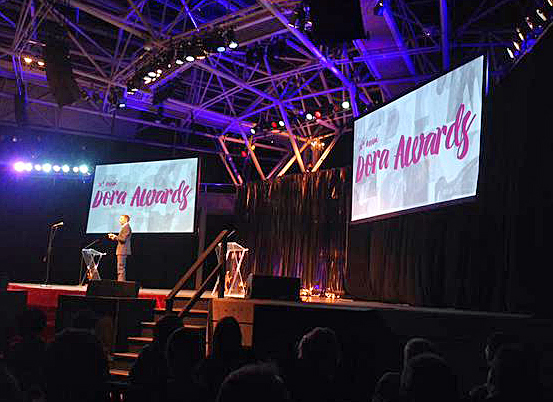 Our Executive Director Susan Worthington attended The Dora Mavor Moore Awards (otherwise known as The Doras), on Monday, June 22. Despite the threatening rain, she had a great time celebrating outstanding in achievements in the Toronto arts community, and shared her experience with us.

On June 22 at the WestJet stage at Harbourfront Centre, the 36th annual Dora Mavor Moore Awards were held. The Doras are named for Dora Mavor Moore (1888–1979), a well-loved teacher and director who helped establish Canadian professional theatre in the 1930s and 40s. Recognizing the outstanding achievements in Toronto's performing arts industry, the Doras honour the creators of over 200 theatre, dance and opera productions annually in the following divisions: General Theatre, Independent Theatre, Musical Theatre, Dance, Opera, and Theatre for Young Audiences. The awards in each division are voted on by a jury of eight to ten individuals drawn from the professional performing arts community. Each recipient receives a bronze statue cast from an original by Toronto sculptor John Romano. 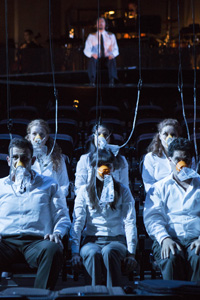 Soundstreams’ presentation of Brian Current and Anton Piatigorsky’s opera Airline Icarus was nominated for five Dora Awards–Outstanding New Opera, Outstanding Music Direction (Brian Current), Outstanding Production, Outstanding Set Design (Teresa Przybylski) and Outstanding Performance by an Ensemble. The other nominees in the Opera/Musical Theatre Division included Tapestry Opera, Canadian Opera Company, Soulpepper Theatre Company, Acting Up Stage, and Against the Grain Theatre, all of whom received multiple nominations for their work. And, while Airline Icarus didn’t win any Doras this year, the excellent work produced by our colleagues was equally worthy. Soulpepper Theatre (Spoon River) and the Canadian Opera Company (Falstaff, Die Walkure) took the lion’s share of the Doras in our division, with Outstanding Choreography going to Acting Up Stage Company. Similar awards exist across the country in Vancouver (the Jessies), Calgary (the Betty Mitchell’s) and Edmonton (the Elizabeth Sterling Haynes Awards), but only the Dora Awards provide significant acknowledgement for productions of opera through a separate opera division.

Several of the creative artists and performers from Airline Icarus attended the event, and despite the outdoor venue and the predictions for big storms that evening, we had a fantastic cheering section for our nominated colleagues. The weather gods were kind, and a total drenching was avoided during the show. 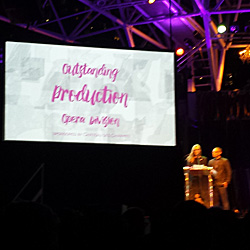 The awards show and its infamous after-party are produced by the Toronto Alliance for the Performing Arts (TAPA). Some 1,000 artists from the performing arts community in Toronto gather together to celebrate accomplishments, reconnect with colleagues and friends, and to fondly remember those who have passed away over the last year. It’s a great celebration of both the new and the traditional, and I was particularly delighted when one of the special awards, The Silver Ticket, which is a lifetime achievement award, was given to Fina MacDonnell of The Rabbits Choice Props, celebrating her over 30 years of props building for both Toronto and international theatre and opera companies.

Jacoba Knappen, Executive Director of TAPA, took the opportunity to announce My NO, an app for iPhone and Android that goes live this fall. It will provide access to events in Toronto and environs, with direct links to box offices, information about companies and their productions, as well as maps and transit information.  An exciting development in the community’s ability to promote our concerts and productions.

Congratulations to all of the nominees and winners! Here’s to a fabulous season of opera and theatre to be celebrated at the 37th Doras next June.

For a full list of the winners of The Doras, visit the Toronto Alliance for the Performing Arts.

Read the press release about the winners.