Sign up to our EMuse Newsletter for Exclusive Content!
May 11, 2015   Category: Community Engagement and Outreach Composer Spotlight 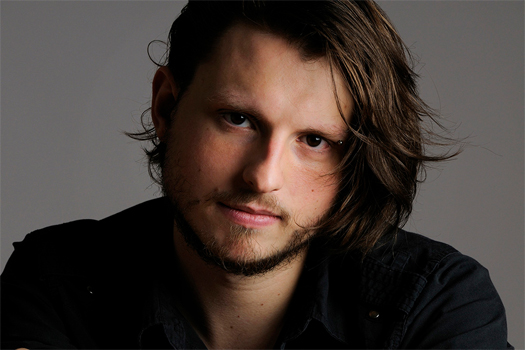 James O'Callaghan will be one of six composers chosen for this year's Emerging Composer Workshop, taking place May 14 to 24, and featuring guest mentors Kaija Saariaho and Jean-Baptiste Barrière.

James is a composer and sound artist based in Montréal, who is praised for his “mastery of materials and musical form” (Electromania, Radio France) and “highly refined sense of colour” (Vancouver Sun). His music intersects acoustic and electroacoustic media, employing field recordings, amplified found objects, computer-assisted transcription of environmental sounds, and unique performance conditions. We chatted with James over email about how he became a composer, important music moments in his life, and how he composes.

Soundstreams: How and when did you first realize you wanted to become a composer?
James O’Callaghan: My only involvement in music before university was briefly dabbling in electronica. I enjoyed this, but always found I was more interested in working on the sounds than coming up with tunes. In my first year of university, I tried my hand at many different fine arts, but through an introductory electroacoustic class, I discovered that there was an exciting kind of music devoted to working directly with sound, which really gave me the first big push in that direction. I'm still very interested in working across disciplines, and so there was never a point where I decided to settle on 'being a composer' – it's more that it happens to be the most rewarding and available vehicle for my artistic pursuits at the moment.

SS: Why do you compose?
JO: When I first started it was the only kind of 'therapy' that really worked in dealing with anxiety and depression. Now that it's really a vocation, that's still an element, but it's more cerebral – I have particular aesthetic questions I want to pursue. I also hope that there's some way of giving back by making art, that it's not just a purely self-absorbed activity.

A big part of why I'm so interested in working with environmental and everyday sounds is to try and make music that says something about our lives, and isn't just an abstract curiosity. I do have a lot of doubts about all this, but I think that art is a dialogue and that doubt is a really important vehicle for moving forward.

SS: What is your process for starting a new composition?
JO: It's a bit different for every piece, but I'm always very conceptual. So, there's a particular idea about perception, or a philosophical or social idea, and that determines how to proceed. It's important for me to begin working with sound early in the process, so often that involves gathering recordings (either to be used directly for electronics, or as material from musicians playing the instruments I'm writing for). If writing for instruments, I often assemble recordings first, and then try to transcribe that assembly into notation. I organise the form of my pieces very visually, so at several points during the composition I make diagrams of the morphology of the sounds over time – what kind of 'shapes' I want to hear, how long things last, and where they are in terms of register.

SS: What was your most inspiring musical moment?
JO: I have a few. I first heard [composer] György Ligeti when I was 13, watching Kubrick's 2001: A Space Odyssey. At the time I was not at all involved in music, I didn't even much like listening to it, but hearing this strange music blew me away and that encounter stuck with me.

When Scott Walker's album The Drift was released, I turned out all the lights, lay on my back alone, and listened to it from start to finish in the middle of the night. I think that was the most emotional musical experience I've had.

I used to live near train tacks that I could walk along and follow to where they crossed over a highway median. There was a little hollow of earth underneath the train tracks where a person could fit inside – I would go and wait for the train to come by and just lie in this tunnel and be totally surrounded by sound and vibration.

Requiem by György Ligeti, from 2001: A Space Odyssey

SS: In a parallel life, if you weren’t a composer/musician, what else might you be?
JO: Hopefully these parallel lives don't have to remain 'ifs': I'd really love to spend more time writing (both fiction and nonfiction) and filmmaking, as well as contributing more to various social causes. I've done bits of all of these in the past, but I'd have great regrets if I never pursued them further.

http://www.youtube.com/watch?v=usFFKNRB2z8
Run With Us by Lisa Lougheed

Visit James O'Callaghan's website to learn more about him and his work. You can see James's work performed at 21C After Hours #2 on May 22.