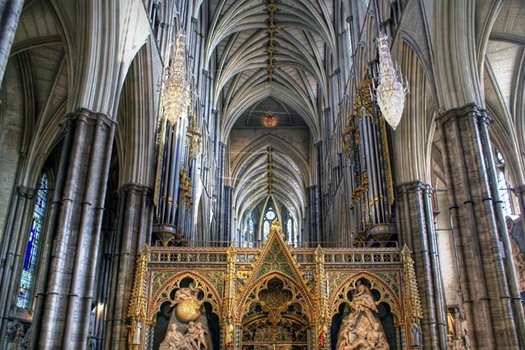 Tonight’s concert celebrates the Choral music of English composer Sir John Tavener (1944–2013) in the manner that Soundstreams has often presented him: in the company of other music with which he had certain affinities. The English choral tradition is represented, but also sounds from the East and from North America, both directions that interested Tavener.

Toronto held a special attraction for Tavener. When he visited here for the Canadian premiere of his Ikon of Light, at Soundstreams’ invitation in 1995, he remarked that, “The light here has a particularly luminescent quality.” Tavener and his wife Maryanna had come to Toronto for a concert in the Encounters series, which Soundstreams co-produced with CBC Radio’s network series Two New Hours. They had travelled for that concert at Grace Church on-the-Hill despite his fragile health, and with the cautious approval of his physician. Tavener associated luminescence with a wide range of values in his work, from a certain sonic sheen in his harmony and scoring, to representation of the spiritual in music. 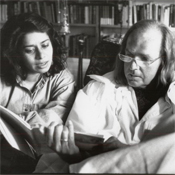 Tavener returned in 2002 for a second Soundstreams production of his music at St. Michael’s Cathedral. This time he was in the company of the Bombay-born soprano Patricia Rozario, whom Tavener met in 1991, and who had subsequently become his muse. He wrote on his website, “Here was this Western-trained singer who had a naturally rich Indian character to her voice. I wrote Mary of Egypt for her and almost everything else that I wrote for soprano for the next twenty years.” Of the four Tavener works in tonight’s concert, Patricia Rozario appears as the soloist in Lament of the Mother of God, and with the assembled forces in Song for Athene.

Tavener composed Lament of the Mother of God for solo soprano and a capella choir for the Norwich Festival of Contemporary Music in 1989. It uses an Orthodox Christian text for Holy Friday, marking the death of Christ on the cross and the sorrows of His mother. Tavener wrote, “The Lament must be sung with an ikon-like stillness and great purity. It grows in intensity as it climbs in tessitura, but without anything sudden or melodramatic.”

Song for Athene was composed in 1993 and uses texts from Hamlet and the Orthodox funeral service to honour the passing of Tavener's friend, Athene Hariades. Tavener wrote, “Her inner and outer beauty was reflected in her love of acting, poetry, music, and of the Orthodox Church.” The work was included memorably in the funeral service of Diana, Princess of Wales, in 1997.

The earliest Tavener work on the concert is one of his shortest, yet best known compositions, The Lamb. This little gem, with familiar poetry by William Blake, was composed in 1982 on the occasion of the third birthday of Tavener’s nephew, Simon. And Missa Brevis (2005), commissioned by Westminster Cathedral, sets the Latin Mass with music for children’s voices.

Toronto composer Christos Hatzis (b. 1953) recalled an image of Christ accompanying his disciples on the harp while singing the 91st Psalm, as his inspiration for his setting of that same Psalm, choosing to set the text with voices and harp. The Psalm begins with the lines, “He who dwelleth in the secret place of the Most High, shall abide under the shadow of the Almighty.” Hatzis says he went to this secret place, “By having the harp play a simple tune while the choristers whisper quietly the texts of the opening line. Whispering, inhaling and exhaling and humming are the sounds that draw the listener inwards to this secret place that resides deep within us and makes our contact with the unseen world possible. Psalm 91 begins and ends this way. In between, the music is like a series of windows opening and revealing some hidden meaning of the text. Extreme textures, registers, precarious vocal balances, sound effects like tone clusters, thunder effects on the harp, stomping of feet and aleatoric (chaotic) vocal lines, all are used to reveal the majesty of this text.”

By contrast, the setting of selected verses of Psalm 116 by the late English composer Jonathan Harvey (1939–2012) in his I Love the Lord is for the most part relatively simple and straightforward. Harvey said that his elderly mother often asked him to read this Psalm, and he wrote the music in 1976 for the Winchester Cathedral Choir, with her in mind. While mostly simple and chant-like, the setting rises to an ecstatic climax, before resolving in a mood of confident acceptance. 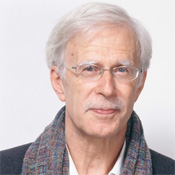 Harvey’s The Angels is a setting of a religious poem by John V. Taylor, who was Bishop of Winchester while Harvey’s son was a chorister at Winchester Cathedral. Harvey’s composition, however, was written for the Choir of Kings College Cambridge in 1994 for the Service of Lessons and Carols.

Tickets available for Song for Athene on April 16, starting at only $20. Learn more about the concert and purchase tickets.