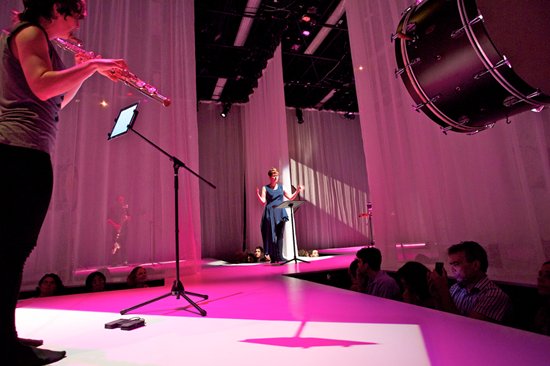 Almost all the music you could ever want is on the internet right now, recorded perfectly and played perfectly and accessible immediately, 24 hours a day.  On the one hand this is fantastic—I can hear huge amounts of music, from different genres and time periods and traditions and cultures, any time I want.  On the other hand, I love hearing music live.  If most music is now available and recorded perfectly and ever present, is it possible that the meaning of hearing music live will change?  For the past few years I have been designing pieces that try to highlight things that can only happen live.  I have written pieces that are so hard that watching the musicians struggle to perform them becomes a central part of the 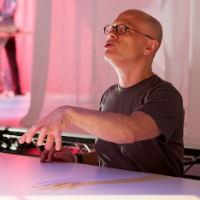 experience;  I have written concert pieces that have elaborate theatrical instructions;  I have written pieces whose power comes from the emotionality of hearing them from inside a community of listeners.  With the whisper opera I had another of these ideas—what if a piece were so quiet and so intimate and so personal to the performers that you needed to be right next them or you would hear almost nothing?  A piece like this would have to be experienced live.  In honor of this, the score to the whisper opera states clearly that it can never be recorded, or filmed, or amplified.  The only way this piece can be received is if you are there, listening very, very closely.

David Lang received the 2008 Pulitzer Prize for the little match girl passion, commissioned by Carnegie Hall for the vocal ensemble Theater of Voices, directed by Paul Hillier.  Lang is Musical America’s Composer of the Year for 2013 and will hold Carnegie Hall’s Richard and Barbara Debs Chair in Composition for the 2013/2014 season.  He is Professor of Composition at the Yale School of Music and co-founder of New York's legendary music festival, Bang on a Can.

The Whisper Opera premieres February 26 until March 1, at The Theatre Centre. Only 52 tickets per performance – buy your tickets now!

Experience the International Contemporary Ensemble in a new way, at our intimate late-night chamber concert on February 28, at 9pm, following a performance of The Whisper Opera. Tickets are limited and only $15 to patrons with their ticket from The Whisper Opera. Learn more information.