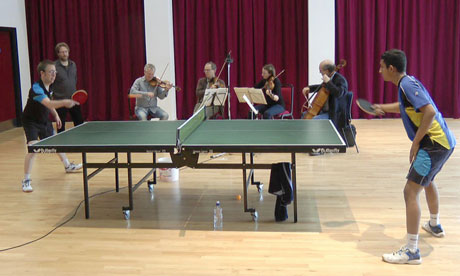 In the summer we become much more active. The weather is nice and we feel the need to get outside and move around, or attend outdoor games. I know many musicians that are avid bikers, soccer players, swimmers and ultimate Frisbee players. Not to mention our collective obsession with events like Wimbledon and the World Cup. However, the general public tends to put into opposition the ideas of music and sports. Music is artistic and creative, while sports are based on strength and endurance. Sports are competitive and use rules that must be followed, while music can put you into a sense of euphoria. But in fact, come to think of it, they both do all of the above.

Music and sport share many of the same structures, which is why they are two of the most common forms of entertainment. The experience of watching a good soccer game and watching an amazing concert turn on similar receptors in the brain. Virtuosic skill and creativity are common traits shared amongst players of both sport and music. Even the terminology we use is common, one “plays” music just like one “plays” hockey. It isn’t uncommon in music schools to see musicians who train the way athletes train. Every musician puts in many hours in the practice room working out particular skills that will benefit their music/game. There is even a book that is commonly read by musicians and athletes alike, The Inner Game of Tennis (http://www.amazon.ca/The-Inner-Game-Tennis-Performance/dp/0679778314). Not only do musicians and athletes share a drive for developing the physical skills required for their art form, but they also share an interest in developing their mental game!

Here we share with you some musical examples that have directly used the concepts found in sports, or taken an inspiration from a specific sport:

There are three examples in classical music that attempt to capture the back and forth of a game.

And, finally, we couldn’t leave you without Stompin Tom Connors’ classic, The Hockey Song: