This concert was very different for Soundstreams in that it was one of the first occasions were the music was a mixture of the composed and the improvised. This style of music, coming mainly out of Jazz, but with roots in lots of other music from throughout the world, is created in the moment–through real-time decisions by members of the ensemble.  This is a tricky place to be in when you’re working with musicians you know very closely, made more difficult when you’re working musicians you’re unfamiliar with. The “unknown” qualities of the music is simultaneously daunting and reassuring in that you don’t really know what will happen, but you do know that you’ll be surprised…you just hope it will be a pleasant surprise.  When working on music like this with a freshly assembled ensemble, much of your time together is figuring out what kind of surprises the musicians like to throw out.  We spent the majority of the days leading up to the concert working out the notes on the page, getting a feel for the other musicians (how they sound and what we sound like together), and generally getting to know each other.

The result of this organic process was fruitful as the group of Australians and Canadians brought together for this concert melded together like we had been playing for years. This is a cliché used in cases where the music seems to immediately lift from the page and become something greater than the sum of it’s parts. We couldn’t have asked for a better group to play this music. 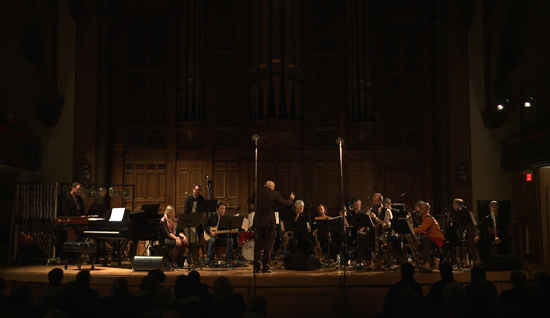 And then the power goes out! The initial feeling I had on stage was that a breaker must have blown. We must have had too many electronic things plugged in, a sound system, turntables, computers, speakers, guitar amplifiers, etc., and therefore must have blown the fuse. If that was the case, it could have been dealt with and we could have continued the performance. When the realization came that this wasn’t the case, the feeling changed immediately to a much heavier sense of loss—a bittersweet loss. Especially because we had played two thirds of the concert and were reaching a point in the music that we “lifted the bandstand” (an idiomatic way of saying that we were playing better than we ever had before and were supporting the music and each other, lifting each other up to play better).  This had never happened to any of this stage full of seasoned performers, and we really weren’t sure what to do.

We moved on packed up and decided to try and hang out as if we had finished the concert, a tradition most musicians adhere to after an amazing performance. During this hang it was decided that we needed to play together again. This was the general feeling throughout our time together but the sudden end of our concert has propelled us to try and find a way to do it again. And maybe the next time we’ll get to finish the concert!