Alec Hall, one of the participants in the 2014 Soundstreams Emerging Composer Workshop, discusses Death in Venice, his new work composed expressly for the workshop and gives us clues that give us context for this piece. 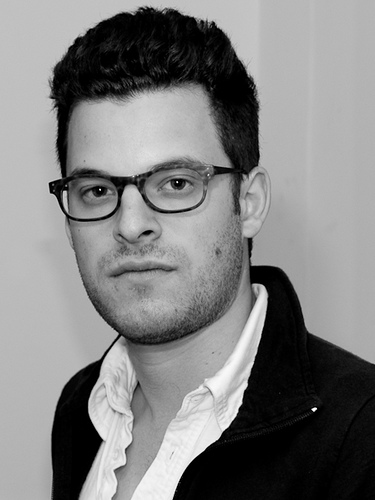 Over the past few years, my interests have moved away from music that locates itself within traditional paradigms of expressivity. To be a little more precise, music which proclaims its existence as an autonomous and abstract aesthetic, whose only references are past music of the same shape and form.

This kind of music as music makes up the vast majority of what we listen to today—regardless of style or genre—which is to say an incredibly stable, cliquish (and in the case of so called “New Music,” verging on cultish) community of pieces, each engaging in subtle, or often hidden, references to previous works in the accepted canon.

Throughout history, parallels often emerge between the developments of “serious” instrumental music and with those of painting, where, for example, the Abstract Expressionism of the mid-twentieth century represents one of the more extraordinary moments of aesthetic convergence. Since that moment, however, sonic and plastic art forms have radically diverged, with only marginal aesthetic or conceptual correspondence occurring.

Just over one century ago Futurist artist Luigi Russolo’s wrote The Art of Noises, a manifesto at the core of which he establishes a dialectical relationship between “noise,” the resultant occurrence of reality-based events, and what he calls “pure-sounds,” those that derive from musical intention.

John Cage follows in his own manifesto (written in 1937 but published in 1940), Future of Music: Credo, where he writes that, “Wherever we are, what we hear is mostly noise. When we ignore it, it disturbs us. When we listen to it, we find it fascinating. The sound of a truck at fifty miles per hour. Static Between the stations. Rain.” In Credo, Cage predicts that one day, composers will be able to make use of electric instruments to produce, or re-produce, all possible sounds.

Although the idea of employing non-musical sounds is actually more than a century old, the vast majority of composers have instead chosen to focus on exploring new instrumental techniques, searching for new sound worlds within existing acoustic frameworks, or deploying stricter forms of conceptual language and/or formal constraints to achieve different results.

The return to the representational in the visual arts, starting in the 1960’s primarily through photography and then followed by painting, never found resonance in musical explorations (although like Debussy and the Post-Impressionists, it wouldn’t be so much as a return as it would be a first step into a new and larger world). That said, developments in both recording technology and computer software in the past twenty years have been so significant that the future both Russolo and Cage dreamt of has decidedly arrived. 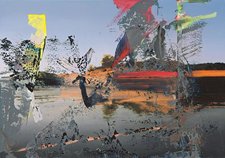 My piece for the SoundStreams workshop, Death in Venice, is a re-worked version of a piece I recently wrote for String Quartet and electronics called Venice, named after the eponymous (German vs. English notwithstanding) painting by Gerhard Richter. Richter’s work is a reflection on simultaneous interactions between the representational and the abstract. A paysage is proposed, with a sharply disjunct, abstract counterpoint that keeps its distance from the background, wherein only occasionally do the two planes of existence converge. In my string quartet, I took recordings I made after the devastation of New York City by Hurricane Sandy, along with others that I either made or found online, to create a similar background on which abstract writing for the strings converges intermittently with representations of familiar imagery.

This new title, Death in Venice, aside from the obvious homage to Thomas Mann, is in fact inspired by friend and mentor, Steven Takasugi, who upon listening to the first recording of Venice thought that the natural course of events would have been for the quartet to drown, metaphorically speaking. In this version of the piece for the Cecilia Quartet, I tried to place this scenario into sound and drama. Just after the highest point of intensity in the piece, the quartet sounds like it is bobbing in a large body of water, going up and down between above the surface and below. Instead of cutting to another image, I have instead placed the quartet below the water for much longer, and tried to write out the first violin part so that it sounds like a struggle to break free of an imaginary restraint, so as to head upwards for a breath, naturally. Instead, the struggling loses strength, and concurrently, a long, beautiful sound emerges, invoking a sense of “moving to the light”, let’s say.

These are just a few elements of how I work with both instrumental writing and electronic sounds, and I look forward to sharing more ideas on the subject in person at the SoundStreams Emerging Composer Workshop in Toronto very soon!