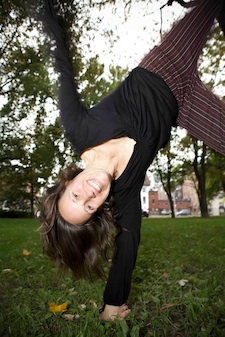 Sweat takes place in a contemporary sweatshop, the multilingual libretto conveying the global nature of the garment industry. Departing radically from traditional opera, this piece sheds the orchestra and focuses on the musical and sonic potential of the human voice in counterpoint to the sound world of the sweatshop.

Here are some thoughts from Juliet on her inspiration for this piece:

During my childhood my mother sewed my clothes, keeping me at the forefront of seventies fashion with nifty vinyl jackets, peasant blouses, and trouser suits with matching hats. Most mothers sewed back then, since ready-to-wear clothing was beyond the budget of a family of seven. My mother was especially proud of her sewing lineage: my great-grandmother had been a professional tailor in the tiny town of Takaka in New Zealand. Not only did she earn a living making clothes, but she created the costumes and the choreography for the local musical extravaganzas. She liked to point out how all that treadling — and all that dancing — kept her legs in such beautiful shape. But when she died in her late eighties, her sewing machine was discarded and my family drifted toward cheap factory-made clothing.

Now my clothes are made by workers I will never meet. Chances are they are women who live very different lives from mine. I will never hear the stories of how these women came to work alongside thousands of others sewing shirts, jackets, skirts and pants. Those stories may end in death — as they did in Bangladesh in three separate tragedies involving hundreds of women in the last year alone. Risking their lives to sew something as banal as T-shirts underlines the distance between my life and theirs.

In our earlier work Stitch, librettist Anna Chatterton and I encountered a powerful reaction to a workshop exercise in which audience members read aloud each other's clothing labels. People wanted to know more about these unseen and unheard workers, to bridge the distance between “them” and “us”. Our new work Sweat seeks to bring the audience into the heart of a contemporary sweatshop. What do these workers dream of, sewing sleeves all day? Was life better in the village left behind? What choice did they make? Confronting the ethical conundrums of the garment trade, the work offers a window into the lives of the workers who clothe us and the high-flying designers whose fantasies feed the fashion industry.

Scored for chorus and seven soloists, Sweat shifts between the intimacy of co-workers and the anonymity of the factory floor, contrasting the inhuman rhythms of mechanized labour with the power of the collective voice. Multilingual sections incorporate the languages and cultures of each production's cast. In Cantonese, English, Tamil and Hungarian, the singers create a web of sound which spans continents and histories.

Without an orchestra the vocal soundscape is vulnerable yet powerful in its intimacy and simplicity. In counterpoint to the voice (solo and in ensemble) is the soundworld of the sweatshop. The flow of time in the factory is controlled by bells, sirens and whistles — in Sweat these elements become another layer of musical and sonic expression. The twelve singers in Sweat draw us into a unique operatic journey whose story is timelier than ever.

Previous operas Soundstreams has assisted with the development and presentation of include Tomson Highway’s Pimooteewin: The Journey, The Children’s Crusade by R. Murray Schafer, and Brian Current’s Airline Icarus (which will be presented in June 2014).