Before the internet had wired us together, one of the ways that people were able to experience art and ideas from around the globe was at international expositions. These events, which first appeared in France around 1850 were of a colossal scale, and allowed the host nation bragging rights as a nexus of activity much like the Olympics. Imagine great pavilions stretching on, filled with new inventions, art, actors, and musicians all vying for the chance to display excellence and uniqueness to an international audience. 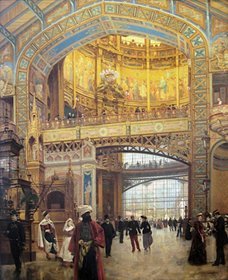 Mired in the colonial nature of that period in history, unfortunately the expos often portrayed nonwestern cultures as the exotic in a demeaning way. Nonetheless, these events were some of the first platforms for international cultural exchange of such scale and perhaps paved the way to more a more positive climate of cultural understanding in future decades. The 1889 Paris expo was one such event, and seems to be regarded as a particularly impressive cultural kaleidoscope. Music history buffs might already know that trendy composers of the time such as Debussy and Ravel heard gamelan music for the first time at this exposition. What seems to be less mentioned is that Debussy also took an interest in the Flamenco guitar music that he heard there. Like Bizet with Carmen, Debussy was inspired by the rhythms of the Cuban habanera and the strumming style of flamenco guitars in several of his piano works.

Listen to The Flamenco influence in La soirée dans Grenade (Evening in Granada) by Debussy (This is a piano roll recording of Debussy himself recorded in 1913!)

In fact, some say that the Paris Expo of 1889 was a key contributor in the international proliferation of the Flamenco art form. In the decades to follow, the style would receive more cross-border attention from Romantic composers, particularly in France and Russia, composing a handful of flamenco-inspired works that we still enjoy today.

Now a truly international form, Flamenco is performed in nations around the world in many locally interpreted forms. In this spirit, we invite you to reimagine Flamenco with us on November 13th, at our first concert in the newly revitalized Trinity St. Paul’s Centre. You’ll have a chance to hear modern-day interpretations of some classic Flamenco repertoire.

As we enjoy having the world at our fingertips, let’s not forget how exceptional it is to experience international collaboration live on the stage!

Visit the Reimagining Flamenco concert page to find out more about this event.