Our Music for China concert on May 14 features performances by Taiwan’s acclaimed Chai Found Music Workshop. Here are some fun facts about the types of instruments that they play, along with a video so that you can know what to listen for at the concert. 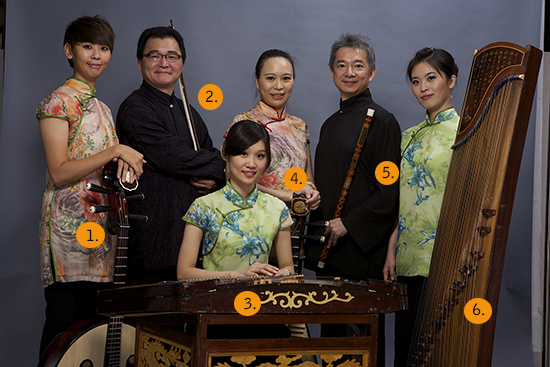 The ruan is a Chinese plucked string instrument. It is a lute with a fretted neck, a circular body and four strings. The four strings were formerly made of silk, but since the 20th century they have been made of steel. The modern ruan has 24 frets with 12 semitones on each string.

The erhu is a two-stringed bowed instrument, sometimes referred to as the “Chinese violin.” It is used as a solo instrument as well as in small ensembles and large orchestras. Quite versatile, the erhu is used in both traditional and contemporary music arrangements, such as in pop, rock, jazz, etc.

The yangqin is a Chinese hammered sulcimer, originally from Persia. It is used both as a solo instrument and in ensembles.

The pipa is a four-stringed Chinese musical instrument. Sometimes called the Chinese lute, it has a pear-shaped wooden body with a varying number of frets ranging from 12 to 26. It is one of the most popular Chinese instruments and has been played for almost 2000 years.

The dizi is a Chinese transverse flute. It is used in many genres of Chinese folk music, as well as Chinese opera and modern Chinese opera. Most dizi are made of bamboo.

The Zheng is a Chinese plucked zither. It has 18-23 or more strings and movable bridges.

Hear what these instruments sound like in this video of Chai Found Music Workshop performing.