Five and a Half Bridges, James Rolfe’s new composition, will premiere at The Three Faces of Jerusalem concert on Sunday January 27 at Koerner Hall. James worked with poet André Alexis who wrote the text for this piece using the concept of a bridge “as a metaphor for connection.” Five bridges from around the world were used as inspiration for each of the verses. Whether they are made of stone or steel, spanning a short ditch or two mountains tops, these bridges and the history and culture they represent piqued our interest. We thought that we would share some photos and information from the web for your enjoyment before you hear the piece at the concert.

Pont Neuf Bridge, Paris (France)
Although Pont Neuf translates to ‘New Bridge,’ this is one of the oldest standing bridges in Paris. It was built from 1578 to 1607 and is 232 metres in length. This bridge spans the Seine connecting the western point of the city to Île de la Cité, the island in the middle of the river that was the heart of mediaeval Paris. King Henry III laid its first stone and for a long time the bridge was the widest in Paris. During the 18th century, the Pont Neuf was the centre of Paris, bustling with both commerce and crime. People gathered to buy goods from vendors of all types and to watch street performers. The bridge was such a popular gathering place that historian Augustus J. C. Hare wrote, “So central an artery is the Pont Neuf, that it used to be a saying with the Parisian police, that if, after watching three days, they did not see a man cross the bridge, he must have left Paris.” 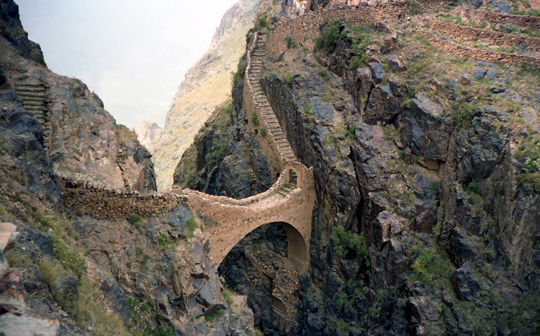 The Stone Arch, Shaharah (Yemen)
Built in the beginning of the 17th century to connect the two separate parts of the mountain-top village, the bridge is a proud legacy from the times of fierce tribes battling against foreign invaders. The bridge was designed and built by the builder Ostta in 1905 and took three years to build. The bridge is 20 metres long and three metres wide. The depth of the drop below is 300 metres. Before the bridge was built, the route between the two mountains used to take a lot of time and effort, as people were forced to go down the groove before climbing slowly up again. It was also hard to transfer goods and animals. 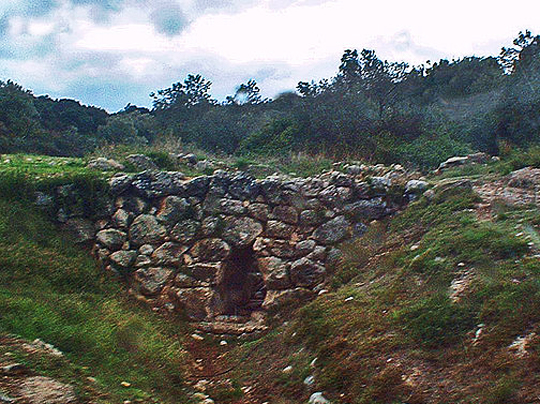 Arkadiko Bridge, Peloponnese (Greece)
Arkadiko Bridge or Kazarma Bridge dates back more than 2000 years to the Greek Bronze Age. It is one of the oldest functioning arch bridges still in existence. The corbel arch bridge was created in Mycenaean times to connect a highway between two cities, which formed part of a wider military road network. The structure is 22 metres long, 5.60 metres wide at the base and 4 metres high. The sophisticated layout of this bridge and the road indicate that they were specifically constructed for use by chariots. Built in the late Helladic III (ca.1300–1190 BC), the bridge is still used by locals.

Si-o-se Pol, Isfahan (Iran)
Si-o-se Pol, which means 33 Bridge or the Bridge of 33 Arches, also called the Allah-Verdi Khan Bridge, is one of the eleven bridges of Isfahan, Iran. It is ranked as being one of the most famous examples of Safavid bridge design. Si-o-Se Pol Bridge spans the Zayandeh Rud River and connects Isfahan’s famous Chahar Bagh Boulevard with the Armenian neighborhood of New Julfa. This bridge is not only one of the oldest but also the largest anywhere in Iran. Built between the years of 1599 to 1602 by Shah Abbas I, it consists of two rows of 33 arches. The bridge’s double-decker structure is built from the yellow brick and limestone masonry. The upper level holds the roadway, now limited to pedestrian traffic, and is flanked by two vaulted arcades. In the old days, when the bridge was a major thoroughfare crowded with carriages, farmers driving stock to market, and carts laden high with merchandise for the bazaar, the side corridors served as pedestrian zones where people on foot could escape the danger of being trampled.

Alexandra Bridge, Ottawa (Canada)
The Royal Alexandra Interprovincial Bridge is a steel truss cantilever bridge spanning the Ottawa River between Ottawa, Ontario and Gatineau, Quebec. It is known locally as both the “Alexandra Bridge” and the “Interprovincial Bridge.” The bridge was constructed by the Canadian Pacific Railway between 1898 and 1900 and crosses the Ottawa River just east of Parliament Hill at Nepean Point in Ottawa. The bridge was designed primarily to carry CPR trains but also had a track for local electric trolley service between Ottawa and Hull, as well as a lane for carriage traffic. During the late 1950s the bridge was upgraded to carry vehicular and pedestrian traffic. The closure of Ottawa Union Station in 1966 saw the last passenger trains use the Royal Alexandra Bridge and the railway tracks were removed as the bridge became exclusively a vehicular-pedestrian bridge.

Listen Five and a Half Bridges at The Three Faces of Jerusalem concert on Jan 27 at 3:00 pm at Koerner Hall. If you would like to find out more about this work, James Rolfe will join Lawrence Cherney to give a pre-concert chat at 2:00 pm.

"Five and Half Bridges", "James Rolfe", "The Three Faces of Jerusalem", Commission, Premiere